The Prime Minister’s encouraging speech is one she should have made in the first few weeks of her premiership. She did make a strong limited statement in the early days. As the months went on, though, months which saw all those Remain shenanigans and lost potential trade opportunities, she appeared to be drifting somewhat.

But now some flesh has been put on the bones in terms of detail. It has been acknowledged that full single market and customs union membership is incompatible with the electorate’s desire for leaving the EU. It has been noted that most voters and campaigners on both sides were fully aware this would be the case. May has admitted full control over immigration has been impossible within the EU’s grip, and has shown commitment on allowing already-settled EU citizens to stay here, which is only right. Most importantly, assertive words have been levelled at the EU bigwigs and the other member states: do not get in our way, in both of our interests. Better late than never, Prime Minister. 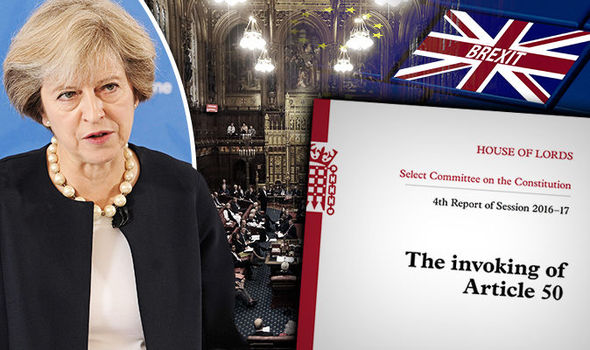 There are only now two factors that could prevent our independence bid. Firstly, Parliament will vote on the final deal the government negotiates. May has done this to give her a better chance of putting Article 50 through and get the ball rolling. While it is a valid point that the onetime 75% bias of MPs towards Remain could prejudice their eventual decision, we realistically have to accept May’s approach in order to politically legitimise the exit process. The arch-remainers will not then be able to accuse us shirking due-process. It will also demonstrate good will and help the government to persuade Parliament to support its plan. While there are the die-hard MPs who will oppose any deal no matter what, mainstream thinking seems to be shifting in both the Conservative and Labour parliamentary parties. They are beginning to see that to reject Article 50, or the eventual plan, will seriously weaken the country’s economy and trade deal prospects - not to mention defy the voters.

The other threat comes if the EU doesn’t play ball in allowing us access to the single market, either tariff free or with nominal contribution payments. As the Prime Minister made clear, it is in their interests to let us do this. Germany is of course the lynchpin here. Angela Merkel (or whoever replaces her) will have to decide whether to miss out on a vast consumer market of 60 million people or not. And the Germans being as business-like and industrious as they are, it would be hard to see them turning it down.

In one sense, we can understand why the EU wants to give no quarter; because otherwise more member states will want their own tailor-made deals or want to leave. Power, which is what the EU has become truly about, will be lost. However, they should realise harsh treatment of the UK will also reflect badly on them, as well as hurt each member state economically. As the mainstream MPs seem to be shifting in their approach, then so should the EU. The excessive, centralising focus of the project have pulled it far off course from the simple common market it should be. Perhaps the bloc will see its dictatorial and expansionist days are numbered, and it can only survive by respecting the concept of the nation state and changing its ways. If this is pie-in-the-sky wishful thinking, then the pragmatics of the situation – wanting to avoid economic loss and damaging political uncertainty – should make sure the EU is cooperative. In turn, Parliament will be broadly satisfied, and the deal will be approved.

Although May’s outline of the contingency plan to revert to WTO rules if the aims are not achieved will make some Liberal Democrats shiver with horror, she was right to make it. What sort of plan doesn’t have a fall-back? That scenario really would not be so bad, and our system could adapt. Stating the contingency puts the EU in its place, rather than throwing ourselves at their mercy. We need them to know we would have the resolve to take the risk. And those wishing to thwart our independence at home need to know that too.

So a good start, Prime Minister, albeit it was a long time coming. But of course this should not make Labour Leave complacent. We should continue applying pressure, both to make sure Brexit happens and the right's vision for it is kept in check. We need to put at the forefront of our policy a charter of rights, including workplace rights, which cannot be overturned by a single vote in Parliament. And of course, we should keep the pressure on the Labour party as well. Encouraging words from Labour have been growing, in different ways, from figures such as Jeremy Corbyn, Andy Burnham and Keir Starmer. The stance is not quite right yet – as the Greek chorus of referendum denial still appears from the wings every so often, led by Lammy and Mandelson – but it is getting there. It is up to us to influence our party colleagues, so that Labour not only embraces departure from the EU (all of it!), but helps shape an ambitious and fairer nation after we leave.