The "turf wars" between the departments led by Boris Johnson, David Davis and Liam Fox had been a distraction, wasting time and energy, the Institute for Government (IfG) report said.

The analysis, drawing on official data, also found that some of the departments likely to have the heaviest workloads because of Brexit have been badly hit by budget and staff cuts.

The IfG's Whitehall Monitor criticised Theresa May's decision to create a new Brexit ministry under Mr Davis and the Department for International Trade under Dr Fox but acknowledged the situation was now appearing to "settle down".

With three departments, including Mr Johnson's Foreign Office, managing Brexit "time and energy was inevitably wasted in turf wars, fragmentation, incoherence and a lack of clarity around roles and responsibilities". 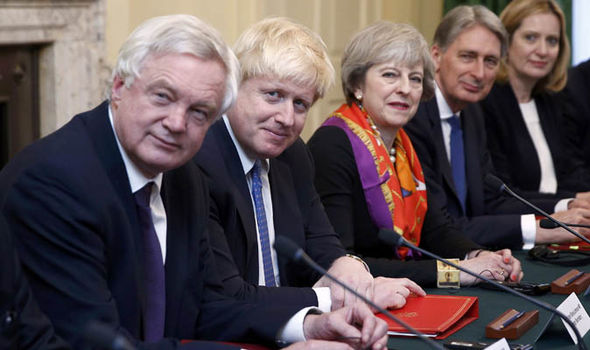 It suggested a better option might have been to support a Cabinet minister for Brexit with a unit in the Cabinet Office.

The report also noted that some of the departments facing the biggest challenges around Brexit have experienced "deep staff and budget cuts".

Staff levels at Defra - responsible for the heavily Brussels-influenced agriculture sector - have fallen by more than a third since 2010, with a reduction in its day-to-day spending of more than a fifth since 2011/12.

The Home Office, which will have responsibility for the new immigration system being drawn up after Brexit, has had its budget reduced by nearly a fifth and lost about a tenth of its staff.

Chancellor Philip Hammond announced up to £412 million extra funding for the Foreign Office and the two new departments, but the IfG report said it was "unclear whether this will be enough" and there were "no details of extra money to help other departments".

The report added: "Drafting the Great Repeal Bill - which aims to transpose EU law into UK law where practical - is also proving a more complex challenge than expected, which could further add to departments' workloads.

"Departments thus face big challenges in planning for and beyond Brexit, many doing so with fewer staff and less money, while needing to carry out relatively unfamiliar tasks."

The report also criticised the "patchy" approach to transparency in Whitehall, singling out the Home Office under Mrs May as one of the worst-performing departments in responding to information requests from MPs and the public. Only the Ministry of Justice and Department for Education were rated poorer.

"This isn't exactly encouraging for those who had hoped that the new Prime Minister would build on the coalition's open government initiatives," the report noted.

Whitehall as a whole has become less transparent in its responses to Freedom of Information requests over the past six years: at the start of the coalition, government departments withheld information in full in response to 25 per cent of requests; by the second quarter of 2016, this had risen to 40 per cent.

The report suggested that "broadly, one could say that most of Whitehall is performing reasonably well despite big changes in recent years" but "this may not be the case for some of the public services that departments are ultimately responsible for".

Article originally posted on the Express