Jeremy Corbyn has revealed that Labour MPs will be subject to a three-line whip on the Article 50 bill and could be sacked if they block it.

The party leader told Sky News that "it's clearly a three-line whip" and called on MPs to unite around bigger issues rather than blocking the legislation.

It came as the Goverment warned politicians that they must "respect" the EU referendum result as it published its long-awaited bill that will give Theresa May the power to trigger Brexit.

David Davis, the Secretary of State for Exiting the European Union, said that he hopes Parliament will "pass the legislation quickly" as he tabled the 137 word bill in the Commons.

The tabling of the bill will trigger a fortnight of intense action in the Commons as the Government faces attempts by Labour and the Liberal Democrats to amend the legislation.

A bill to confer power on the Prime Minister to notify, under Article 50(2) of the Treaty on European Union, the United Kingdom’s intention to withdraw from the EU.

Be it enacted by the Queen’s most Excellent Majesty, by and with the advice and consent of the Lords Spiritual and Temporal, and Commons, in this present Parliament assembled, and by the authority of the same, as follows:—

1 Power to notify withdrawal from the EU

(1)The Prime Minister may notify, under Article 50(2) of the Treaty on European Union, the United Kingdom’s intention to withdraw from the EU.

(2)This section has effect despite any provision made by or under the European Communities Act 1972 or any other enactment.

This Act may be cited as the European Union (Notification of Withdrawal) Act 2017.

It will then pass to the Lords for further debate. Following that, the process of triggering Article 50 and beginning Brexit could come as soon as mid-March.

Speaking after the bill Mr Corbyn confirmed he will force his MPs to back the bill with a three-line whip in the Commons, which could trigger resignations from his shadow cabinet team.

Asked whether shadow ministers who defy the orders would face the sack, a Labour source said that normal three-line whip procedures will apply, adding it is "reasonable to expect" that would be the case.

It means Mr Corbyn does not intend to allow his top team to block the bill and turn a blind eye.

"I understand the pressures and issues members are under ... Labour is in the almost unique position of having MPs representing constituencies in both directions.

"I say to everyone, unite around the important issues ... I'm asking all our MPs not to block Article 50 and make sure it goes through next week."

As he published the Bill Mr Davis said: "The British people have made the decision to leave the EU and this government is determined to get on with the job of delivering it.

"So today we have introduced a bill in parliament which will allow us to formally trigger Article 50 by the end of March.

"I trust that parliament, which backed the referendum by six to one, will respect the decision taken by the British people and pass the legislation quickly."

David Liddington, the leader of the Commons, said that MPs will be given five days of debates - two next week and three the week after - before the bill is passed to the Lords. Labour MPs are already complaining that they have not been given long enough. 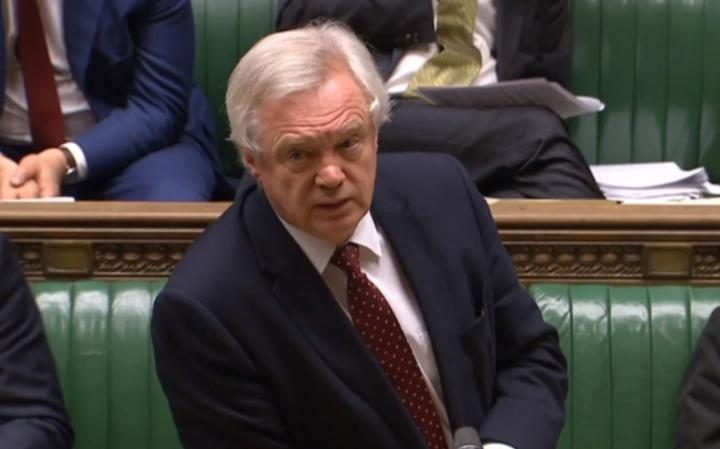 The party's MPs expressed their frustration that they will have just five days to debate the bill in Parliament.

Chris Leslie MP, leading supporter of the Open Britain campaign, said: "The Government had to be dragged kicking and screaming by the courts to bring this bill before Parliament and yet they still seem determined to gag parliamentarians as much as possible.

“It is simply unacceptable for Ministers to try and railroad this incredibly important law through Parliament without sufficient time for proper debate.

“It beggars belief that we will have far less time to debate the legislation that takes us out of the EU than we did previous European treaties.

“This is the most significant law we’ve ever debated on our relationship with Europe and yet the Government will only give it an eighth of the time that was spent on the Maastricht Treaty.”

Article originally posted from the Telegraph